A new art book has just been published as a companion to Swiss artist Nicolas Party’s exhibition L’heure mauve, which presents a both celebratory and solemn meditation on nature, its representation in art and its future.

Nicolas Party is known for his painted sculptures and colour-drenched pastel paintings and installations, which originate from a renewal of the Symbolist figurative tradition. His work revisits the classic codes of landscapes, still lifes and portraiture with singular originality. For his first exhibition in Canada, Party selected various masterpieces from the MMFA’s collection to display alongside his own creations. The artists represented range from masters of European art (Nicolas Poussin, Gustave Courbet and Otto Dix, among others) to famed Quebec and Canadian artists (including Ozias Leduc and Lawren S. Harris) and major figures of the decorative arts, like Frank Gehry.

This book designed by the MMFA’s Publishing Department in collaboration with 5 Continents Editions, Milan, documents the making of the exhibition and retraces the themes covered in it. The artworks are pictured as they are mounted in the exhibition, as each gallery constitutes a unique environment spun from the artist’s imagination. Each chapter of the catalogue is prefaced by an original lyric by Quebec singer-songwriter Pierre Lapointe alongside the lyrics of a song from the musical repertoire. It is these words that Lapointe set to song to create the soundtrack that accompanies the exhibition. The art book features an introduction by Stéphane Aquin, Director of the MMFA, and an essay by art historian Bénédicte Ramade, who examines the exhibition from an ecocritical perspective. Below is an exclusive peek at a few excerpts from her essay. 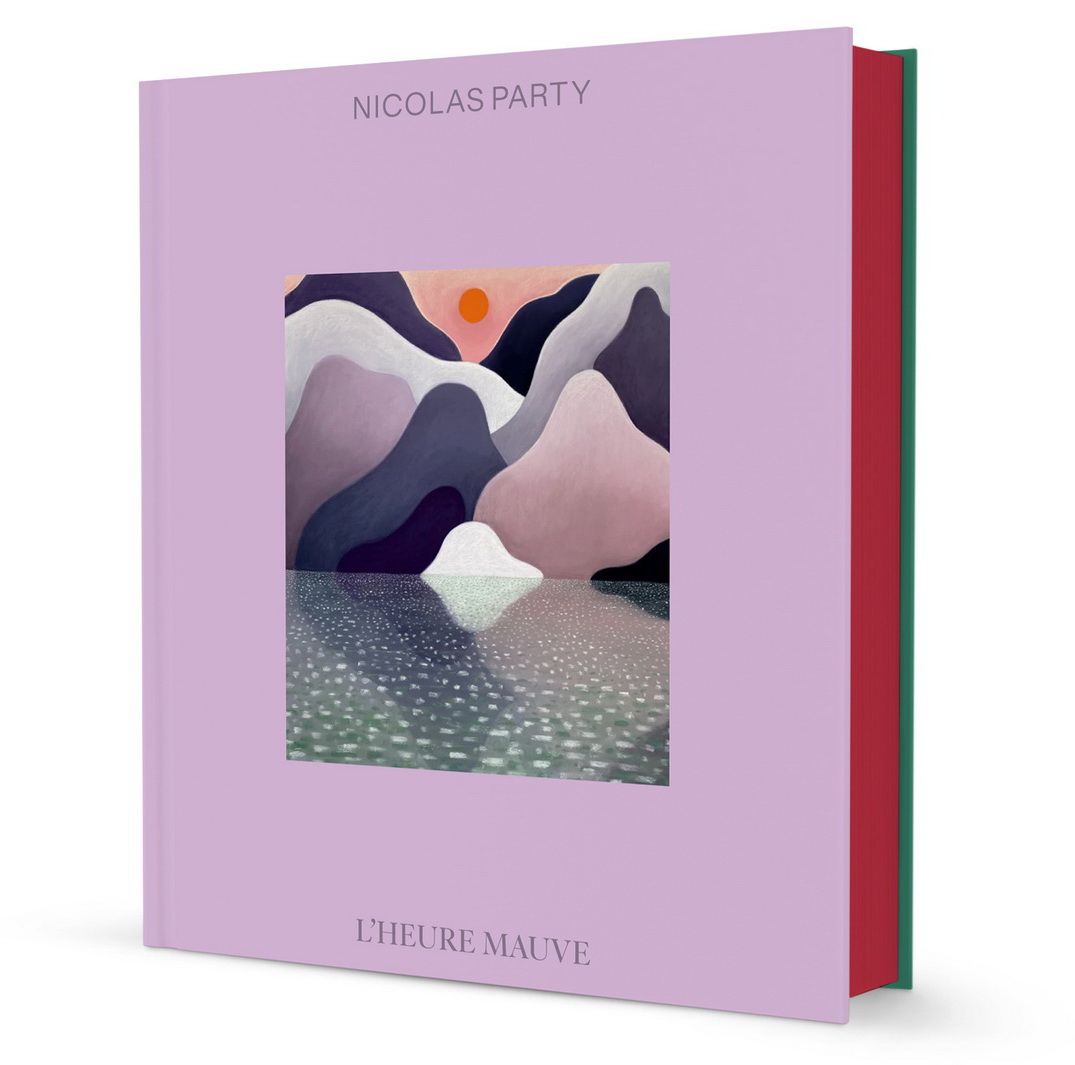 Paintings of their time: Stories of the Anthropocene

How can we look at ancient, Baroque, classical or even modern art without being overcome by the weight of today’s environmental crisis? […] The Anthropocene epoch, as it is called in stratigraphy, is a new geological period; it is the one we are living in, when humanity’s destiny is inextricably linked to that of nature. Although scientists cannot agree on when it began – whether with the agricultural revolution; the first arrival of Europeans to the Americas; slavery and the triangular trade; the Industrial Revolution and carbon-emitting production; the first atomic bomb test on July 16, 1945, in New Mexico; or rampant, plastic-heavy consumerism – there is general consensus among them that the impact of humans on geology and the atmosphere has gone beyond the simple biological agency inherent to all living organisms. Human activity has become an undeniably powerful force of change, although control over it has been lost. No matter how far back its timeline goes, the Anthropocene epoch entails the past, present and future, thus allowing art historians to delve into past works in search of keys, clues and even harbingers of the current crisis. Nicolas Party, a deeply knowledgeable artist of his time, follows suit: his selection of works from the collection of the Montreal Museum of Fine Arts builds an ecocritical bridge from the past to an understanding of the present and the future. 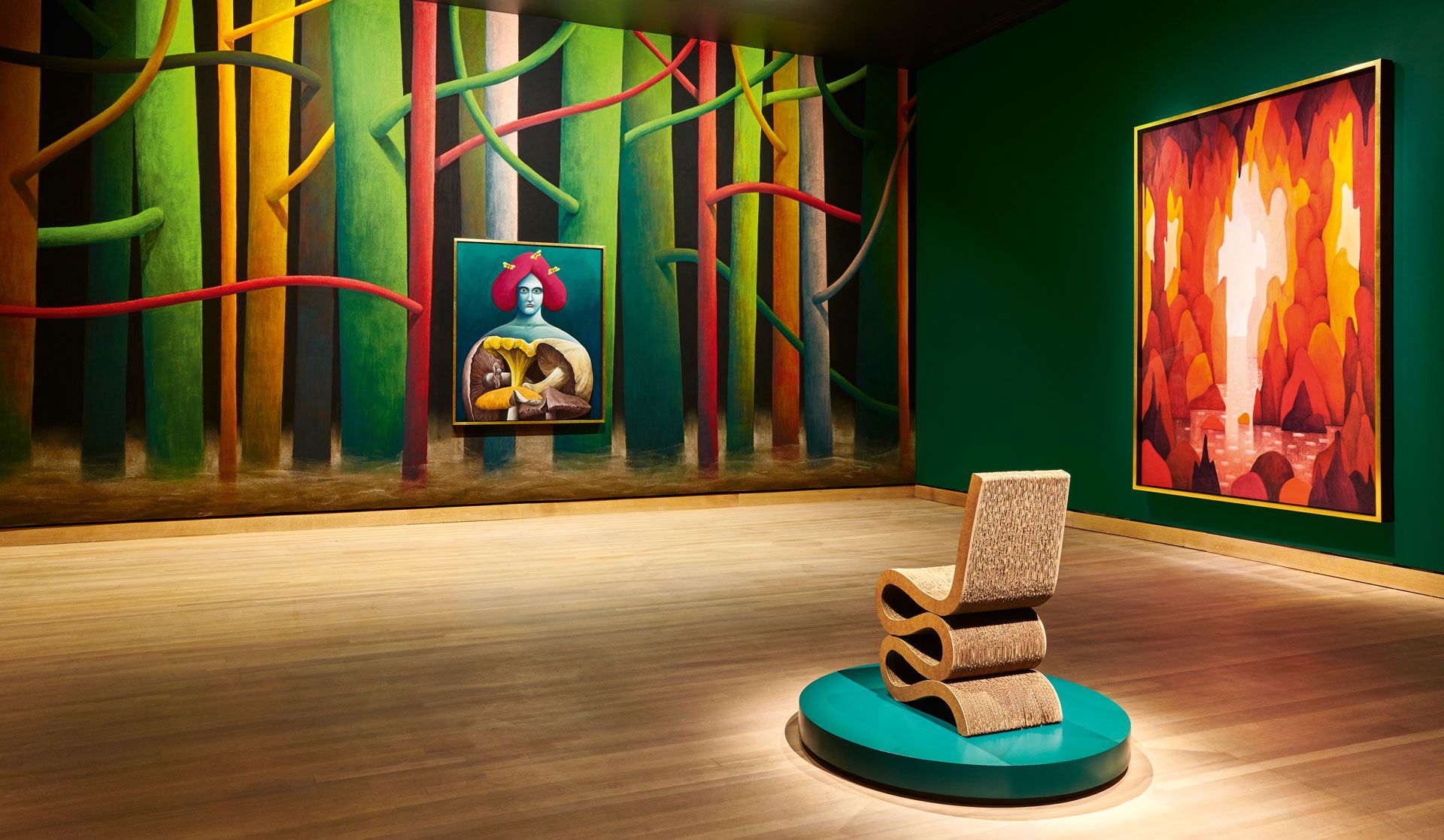 A strange yet fascinating world

The sottobosco [undergrowth] subgenre – botanical and zoological phantasmagoria staged in a “natural setting” after a close study of the subject, falling somewhere between still life and landscape – offers the first key with which to gain entry into Nicolas Party’s dream world, on the surface sleek and cold in style, and embark on an ecocritical experience. Following the example of the paintings of Otto Marseus van Schrieck (known as the inventor of sottobosco), Rachel Ruysch, Elias van den Broeck and Abraham Mignon – among the few painters to have taken up this curious subgenre originating in the seventeenth century – Party’s works display an unsettling blend of a suspended stillness, sense of danger and boundless artistic prowess.

He may create giant painted sculptures of androgynous heads with uncanny faces covered in acid yellow, scarlet red or cerulean blue skin, but he tempers their austere and artificial appearance, their haunted expressions, with trompe-l’oeil renderings of slicked-back hair inhabited by repulsive frogs, toads and slithering snakes. The latter appears in his Portrait with Snakes (2019), a picture of a massive being with alizarin red hair, a work imposing in scale and having a fantastically realistic depiction of the snake coiled up before the subject’s chest. The rings painted in an array of browns and beiges, thick, mighty and robust, heighten the strange presence of the tiny butterfly hovering near the sinister viper’s mouth. Similar insects and reptiles inhabit the disturbing undergrowth of Otto Marseus van Schrieck, whom Party admires and whose Forest-floor Still Life with Three Snakes, a Lizard and a Toad (1663) he had already exhibited alongside his own work in 2020. 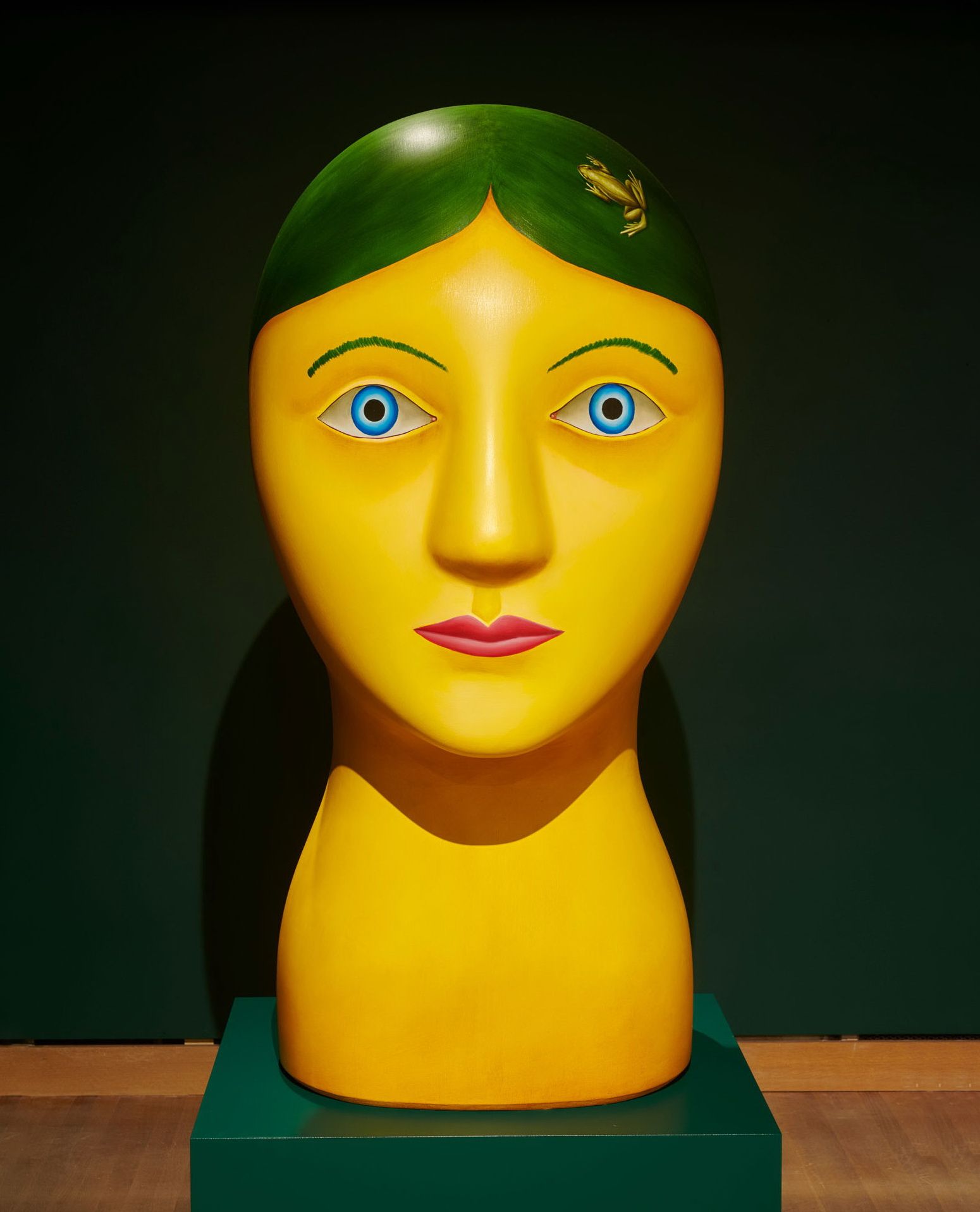 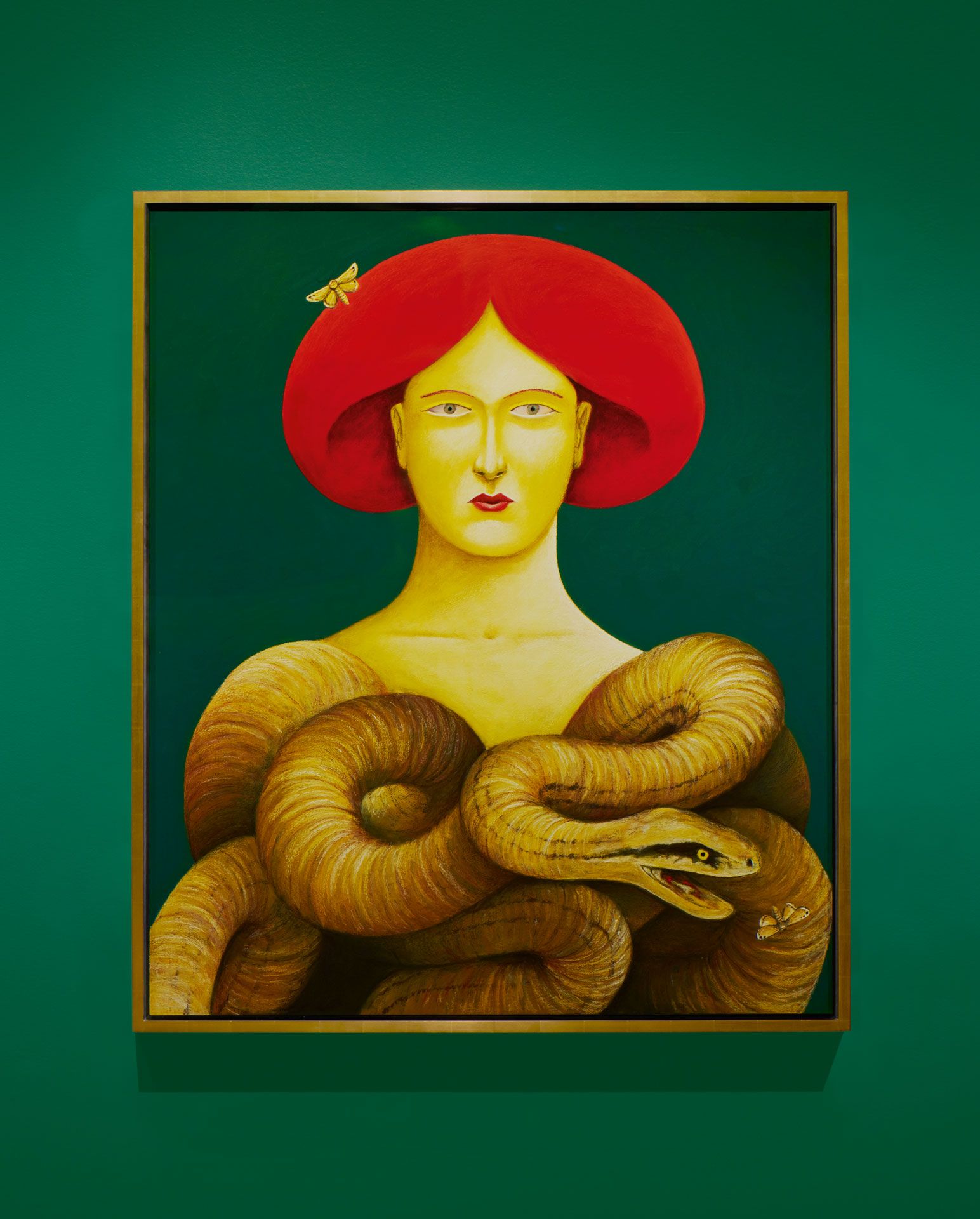 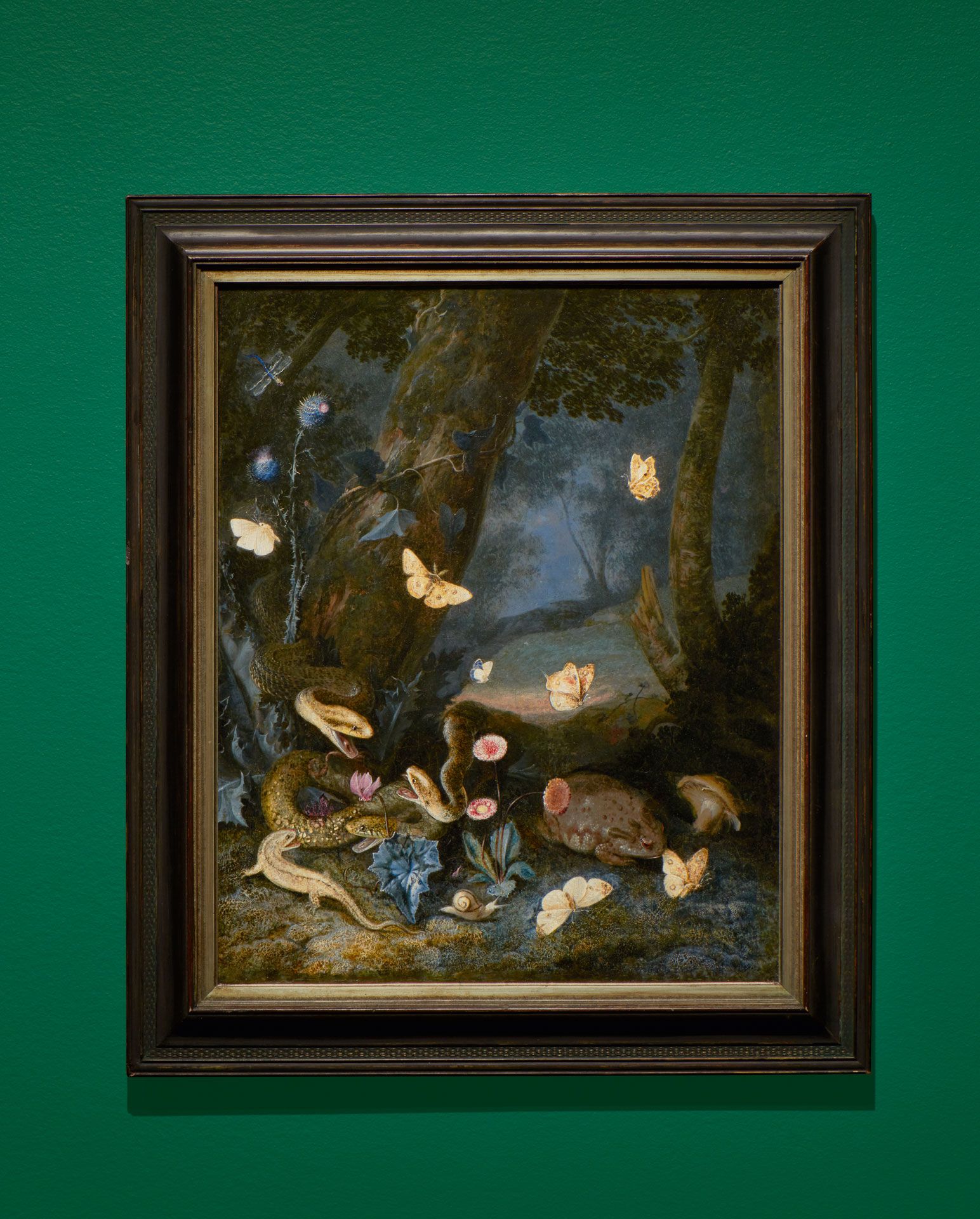 Still life: witness to its time

Party also made a selection of works from another traditional nature-based genre represented in the Museum’s collection to dialogue with his landscapes picturing caves and gaunt, virulently, almost toxically, coloured tree trunks: the still life. The term has never been as fitting as it is today, when a sixth mass extinction threatens current biodiversity.1

It has indeed become difficult to look detachedly at the work of Frans Snyders, Jacques Linard or Cornelius Krieghoff without thinking about the species depicted in them that may now be designated as “endangered,” “critically endangered,” “extinct in the wild” or outright “extinct.” It is not a matter of relating everything to our Anthropocene period, but rather connecting art history’s environmental and geopolitical contexts in order to understand, beyond the tangled web of still life’s esoteric symbols and codes, what works say about the world that saw them created and, by extension, about our own. To look at art from the past through the lens of today is to look for explanations, address present-day impressions and worries, and grasp the deep-seated complexities of time. Works may be old and from bygone days, but they can still have an impact today, which is what informs the thinking behind the choices Party makes. 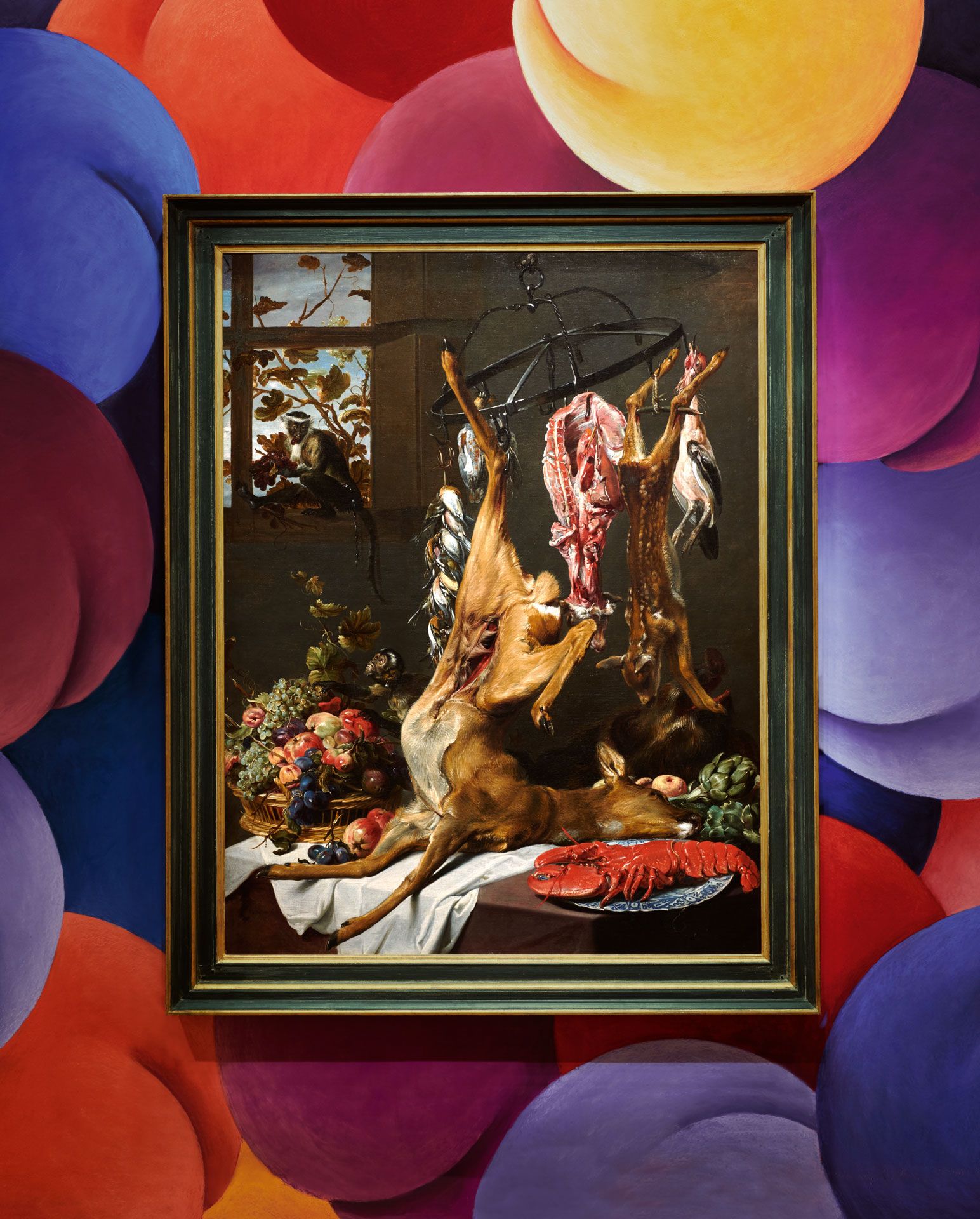 Frans Snyders (1579-1657), Still Life with Game Suspended on Hooks, a Lobster on a Porcelain Plate, a Basket of Grapes, Apples, Plums and Other Fruit on a Partly Draped Table with Two Monkeys, 1640s, oil on canvas, 177.8 x 137.5 cm. MMFA, gift of Mr. and Mrs. Michal Hornstein in honour of the MMFA’s 150th anniversary. Photo MMFA, Jean-François Brière 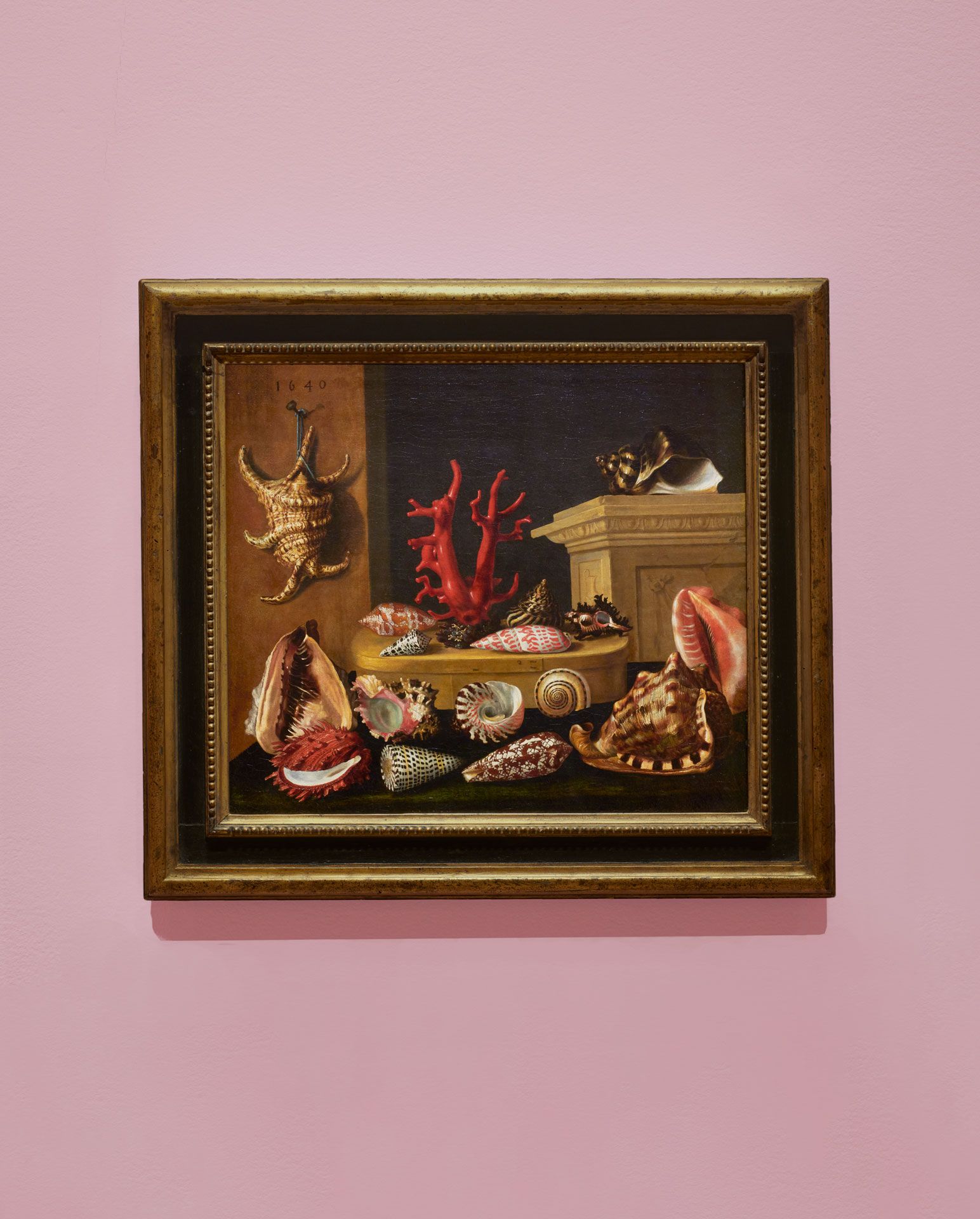 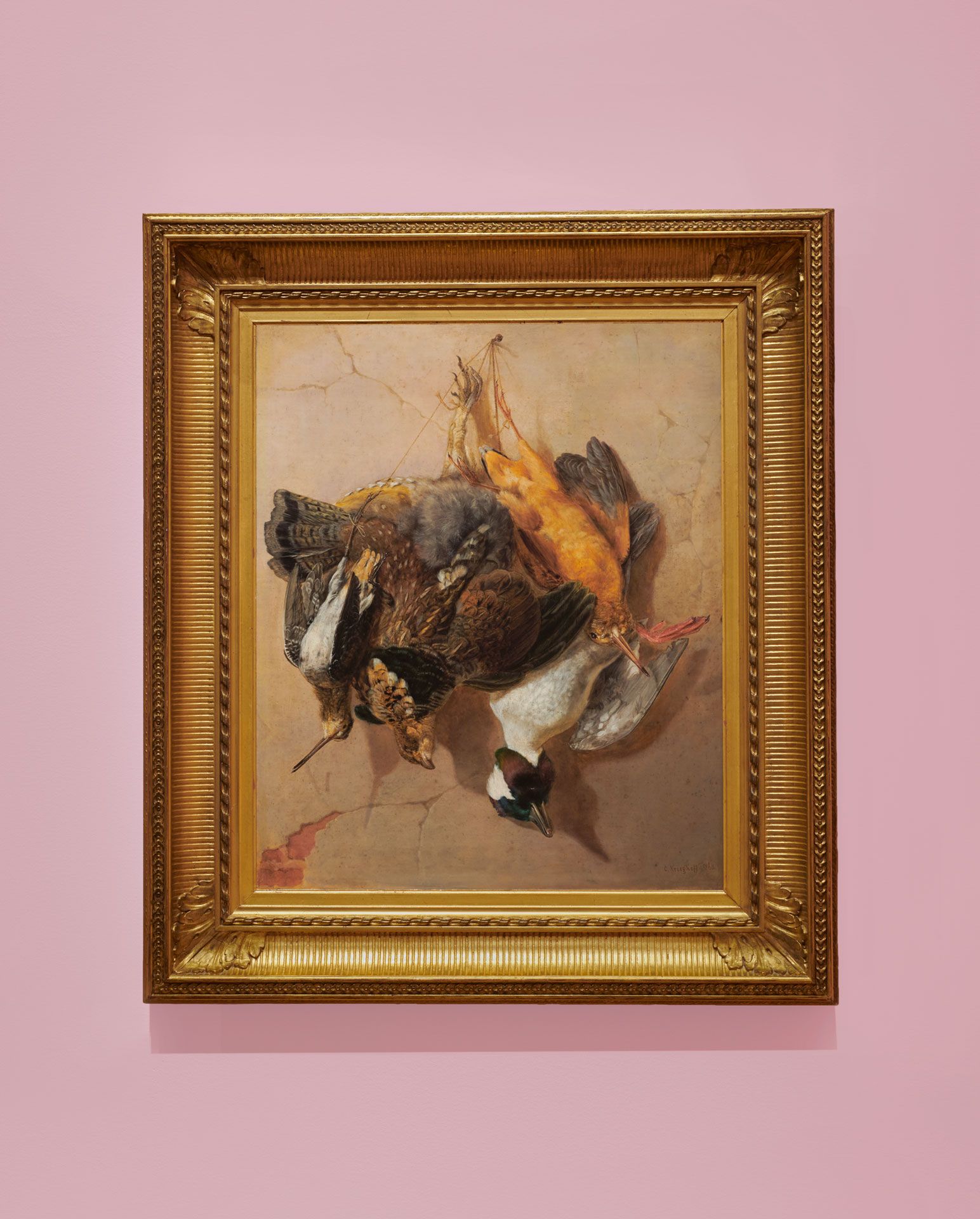 The construction of nature in works of the past – whether testaments to a lost abundance, cultural conditioning or visual stereotypes – says a lot about the present moment.

The great landscapes of the Group of Seven as well as Emily Carr’s “Indigenous” paintings today speak more to resource extraction and the cultural genocide of First Nations than to a Canadian identity naively founded on landscape. Canadians have complacently bought into the characterization of the pioneering, manly painting of Tom Thomson, J.E.H. MacDonald, Franklin Carmichael, Lawren S. Harris and A. Y. Jackson, the painters of forests and nordicity, and the inventors of imagery of a still untamed Canada. Yet when the Seven made their way to Ontario’s Georgian Bay, Algonquin Park or the Algoma region, or even the Rockies further west, those areas were no longer “precultural,” but, rather, easily accessible by train and entrusted to the “capable care” of mining and forestry companies. But above all, they were First Nations lands, rendered invisible. These lands were already being sapped of their riches, their rivers harnessed in the production of energy. 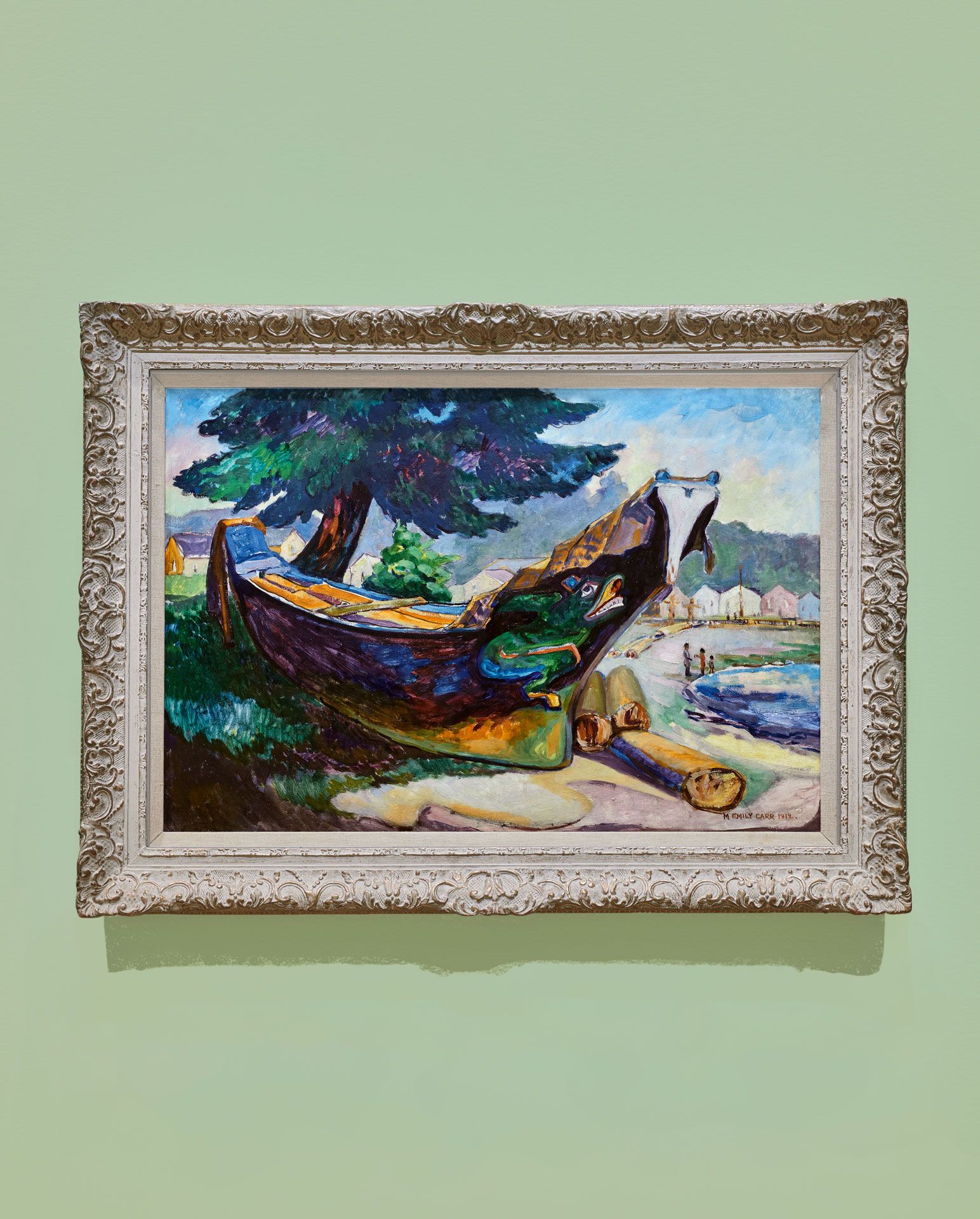 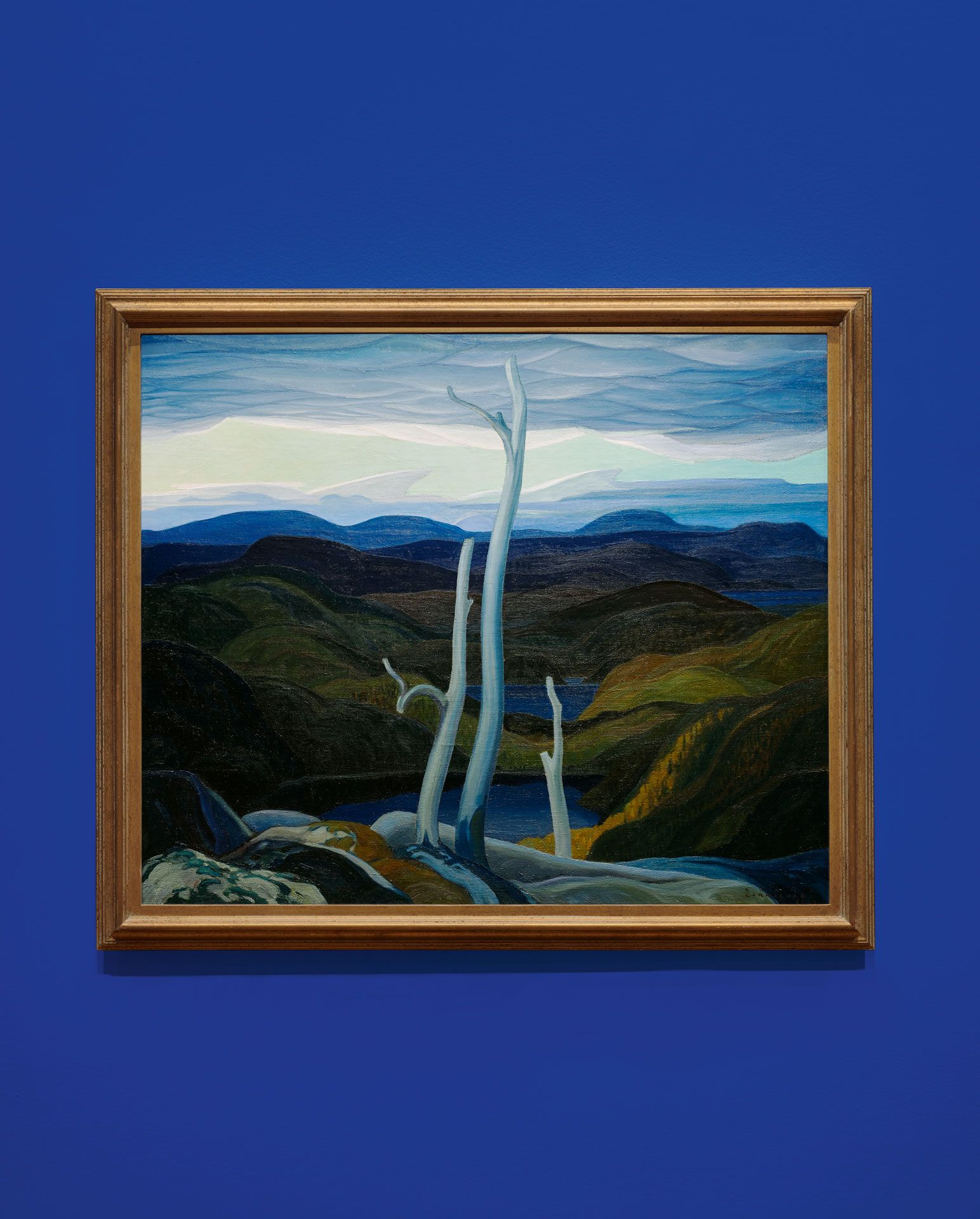 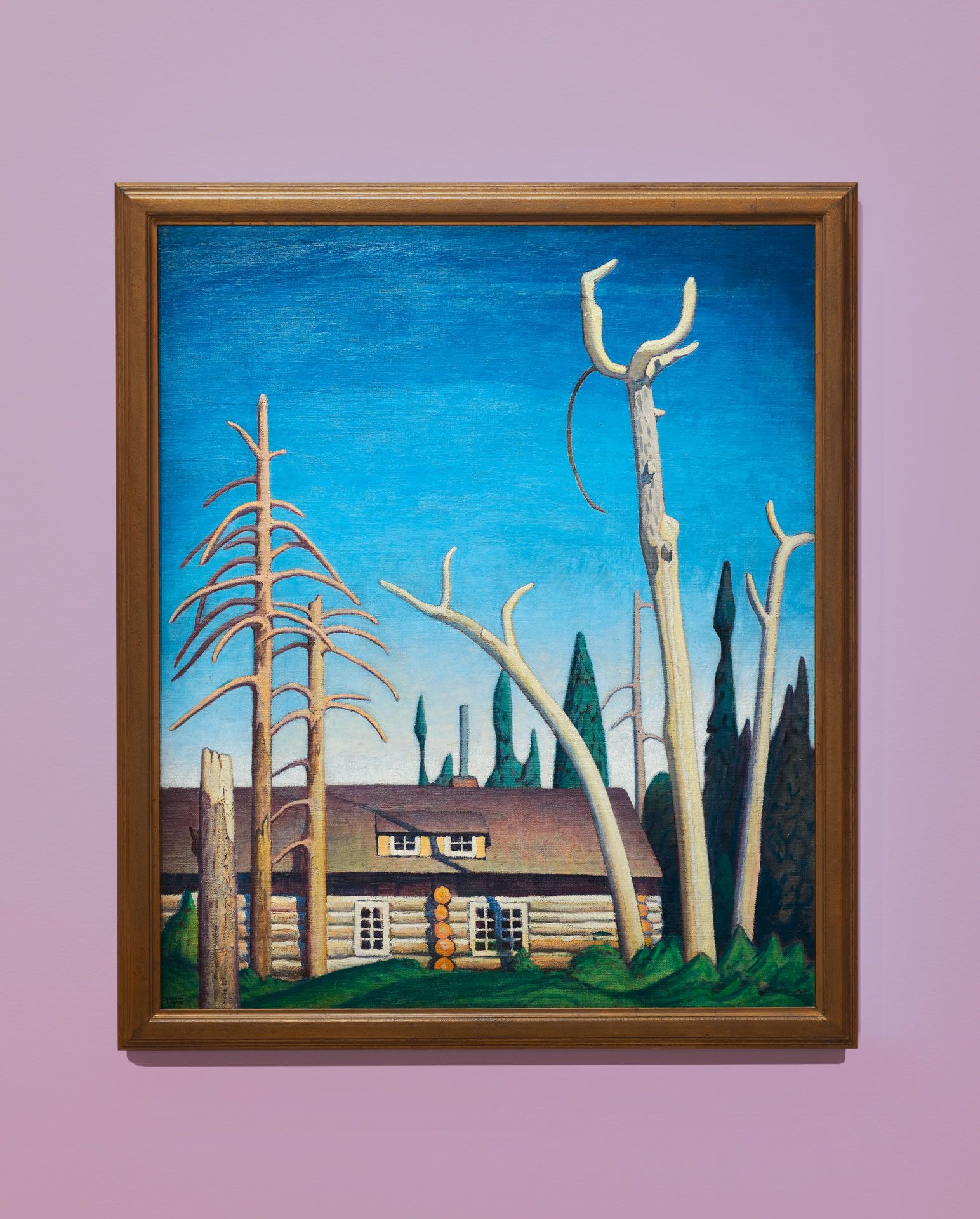 Although those artists’ depictions of rugged and wild landscapes renewed urban audiences spiritually, they were in truth but exceptions. Thomson’s 1915 sketches from life of mountains decimated by fires show the reality. The fate of those lands was already in jeopardy, already under problematic environmental pressures. And although certain members of the group in the early 1930s portrayed mining towns, it was mainly with the purpose of glorifying a sense of progress. Ultimately, the Group of Seven constructed an idea (persisting to this day) of nature eternal, untouched and able to survive anything, in an approach set on informing Canadian art history and establishing an identity. 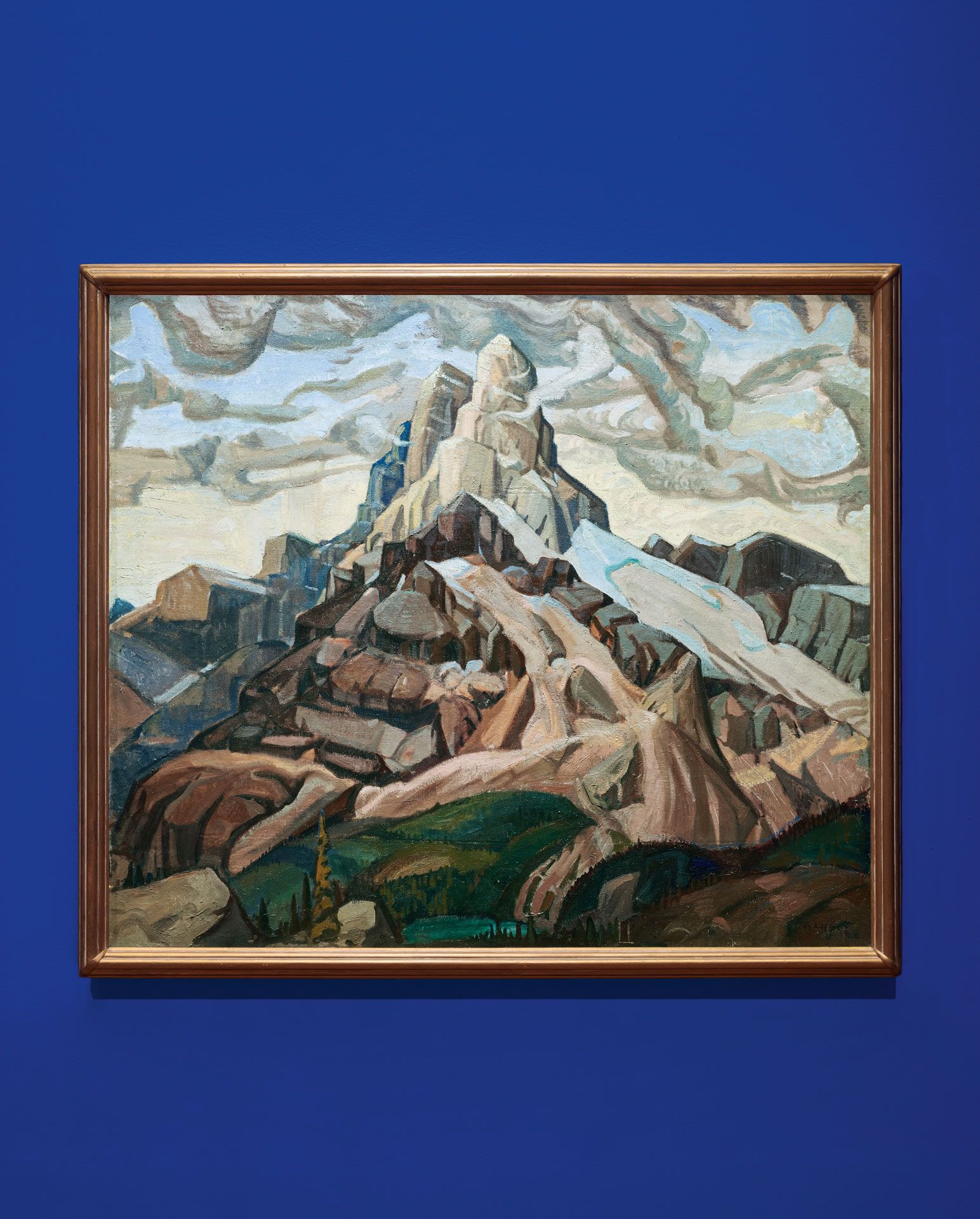 Nicolas Party’s work presents deceivingly timeless spaces for dialogue that are not without cause for unease. In the Anthropocene epoch, the revelation of humankind’s impact on the Earth’s geological composition has debunked beliefs and redrawn the map of science. And what does that change? It brings a new way of appreciating that the planet and nature – down to the very fibres of the earth and the living – are inextricably linked to human activity, whose damaging effects relentlessly escalate at a blistering pace. Party’s art is not militant, and he makes no pronouncement on how or what to think, but he is assuredly Anthropocene in the sense that he has a keen awareness of reciprocal constructions and the melding of nature and culture.

The catalogue is available for purchase at the Museum Boutique and Bookstore and in the online store.

Bénédicte Ramade is an art historian, art critic, independent curator, and lecturer in the department of Art History and Film Studies at Université de Montréal as well as at the School of Visual and Media Arts at UQAM. Ramade has a PhD in Arts and Art Sciences from Université Paris 1 Panthéon-Sorbonne and possesses 20 years’ experience in the areas of Contemporary art and environmental, ecocritical and Anthropocene issues. She has been involved in numerous exhibitions as curator and catalogue editor, and currently collaborates with the Grantham Foundation for the Arts and the Environment, in Quebec, (Apparaître – Disparaître, 2019; and Troubled Garden: Study for Migratory Roots, 2022). Her new book, titled Vers un art anthropocène – L’art écologique américain pour prototype is set to be published this year by Presses du réel.

A poetic meditation on nature and its representations

Into the World of Nicolas Party

1 After the mass extinction of the Cretaceous period that led to the disappearance of dinosaurs, the so-called “Great Dying” that occurred at the end of the Permian era, the Anthropocene is being called the sixth mass extinction of the Earth’s living species, due to many factors (with human activity the primary cause) and being the quickest in scope. See Elizabeth Kolbert, The Sixth Extinction: An Unnatural History (New York: Henry Holt and Company, 2014).

Credits and curatorial team This exhibition is organized by the Montreal Museum of Fine Arts and is curated by Nicolas Party, in collaboration with Stéphane Aquin, Director, MMFA, and Mary-Dailey Desmarais, Chief Curator, MMFA. Its presentation was made possible by the major contribution of Hydro-Québec, in collaboration with Hatch and Mirabaud.

The MMFA thanks the Consulate General of Switzerland in Montreal, the Swiss Arts Council Pro Helvetia, Tourisme Montréal, as well as the MMFA’s Angel Circle, proud supporter of the Museum’s major exhibitions. It further acknowledges the invaluable contributions of its official sponsor, Denalt Paints, and its media partners Bell, La Presse and the Montreal Gazette.

The MMFA is profoundly grateful to the Ministère de la Culture et des Communications, the Canada Council for the Arts and the Conseil des arts de Montréal for their ongoing support.