Educative Exhibition
January 8 to 28, 2015
LIGHT FROM THE SHADOWS

70thAnniversary of the liberation of Auschwitz. This exhibition is produced in co-operation with the Anne Frank House, Amsterdam, the Montreal Holocaust Memorial Museum and the Théâtre du Nouveau Monde (TNM).

In 2015, we commemorate the end of World War II. Seventy years ago, the world was celebrating peace. Also seventy years ago, in March, Anne Frank, a fifteen-year-old teenager, died in the Bergen-Belsen concentration camp, an innocent victim, like millions of others, of this cataclysmic event.

On this occasion, the Museum is presenting the educational exhibition Anne Frank – A History for Today, in collaboration with the Anne Frank House, Amsterdam (in partnership with Veterans Affairs Canada – Quebec Bureau), and the Montreal Holocaust Memorial Museum, in parallel with the creation of the play Le journal d’Anne Frank by the Théâtre du Nouveau Monde (TNM). A set of twelve photographs by the Montrealer Laszlo Mezei, recently taken at Auschwitz-Birkenau, will complete the presentation. Many Holocaust survivors sought refuge in Montreal after World War II (proportionately, Montreal ranks third in the world, after Tel Aviv and New York City, for the number of Holocaust survivors it received). Emilie (Mila) Sandberg-Mesner, a former Museum employee, is one of them: she recalls her memories of the Shoah in Poland. 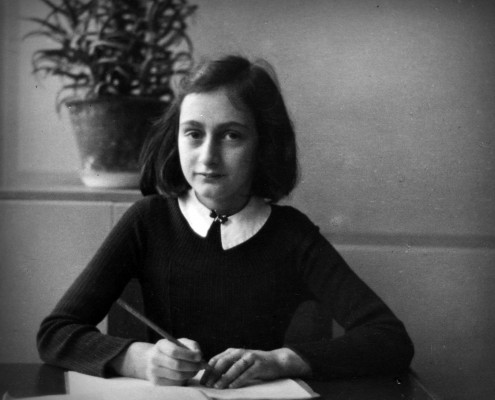 The exhibition Anne Frank: A History for Today imposes on us the duty to remember, so that we may retain the lessons of the past and ensure that such horrors are never repeated. It tells the story of a teenager whose diary, published after her death, remains one of the most read, played and filmed stories in the world. Anne Frank wrote her diary over a period of slightly more than two years, while she hid with her family in an Amsterdam house to escape from the Nazi persecution of the Jews. Through the pages of this diary, written in the difficult context of hiding, crowding and danger, we discover an expressive, energetic and extroverted adolescent who imagines her future with hope and optimism, despite the tumult surrounding her. On entering the gallery, visitors have access to some touching video testimonies by Montreal survivors. They have been gathered by the Montreal Holocaust Memorial Museum, whose entire collection comes from 5,000 survivors who live in Montreal. A bit further on, on loan from the Montreal Holocaust Memorial Museum, a striped prisoner’s uniform from the Auschwitz extermination camp bears touching witness to the human drama. On the gallery walls, some thirty illustrated panels tell the story of Anne Frank and her family in the context of World War II, which turned their world upside-down. In the middle of the gallery, an intriguing cubicle seems to be hiding a secret. As they approach, visitors can hear the voice of a young girl. Once inside, by means of a video projection, they discover Anne Frank reading excerpts from her journal. The role is played by Mylène Saint-Sauveur, the star of the TNM creation, Le journal d’Anne Frank, directed by Lorraine Pintal, which runs from January 13 to February 7. Visitors are thus immersed in the world imagined by the author Eric-Emmanuel Schmitt from The Diary of Anne Frank. Archival images, photomontages illustrating the theatre artists’ creative process and a stage model complete the installation.

In the context of the seventieth anniversary of the liberation of Auschwitz-Birkenau, the Museum is presenting an exhibition of twelve black-and-white photographs of the infamous Nazi concentration and extermination camp by the Montreal artist Laszlo. Born in Hungary, Laszlo Mezei (known by his first name alone) immigrated to Canada after the Hungarian uprising of 1956. He studied photography and art history in his adopted country and in New York, and has photographed hundreds of leading figures in the fields of the arts, politics and sport. In 1999, he published a collection of portraits of fifty-five eminent Canadians. For some years now, Laszlo has taken a passionate interest in historical subjects, documenting events that have shaped our times. The exhibition presents his images of the Nazi concentration and extermination camp, a symbol of the Holocaust and a potent site of remembrance. Laszlo committed himself to the duty to remember, to honour the victims of that genocide, to capture a visual memory of the camp of Auschwitz-Birkenau. These compelling photos – powerful images of the buildings, the railroad tracks and the electrified fences – succeed in capturing the light to express an ineffable hope for humanity.