The renowned Kerry James Marshall has produced a complex body of work exploring the representation of African-Americans in society, culture and art history. Creating portraits, interiors, nudes and landscapes in various mediums, Marshall conflates actual and imagined events from African-American history and culture. For the Biennale de Montréal, he has produced a new series of lightboxes that are a continuation of his work Rythm Mastr, a comic strip featuring an urban superhero who battles the forces of evil using a combination of futuristic and traditional African accoutrements.

Born in Birmingham, Alabama, in 1955, Marshall grew up in Los Angeles, where he graduated from the Otis College of Art and Design in 1978. He currently lives in Chicago. His works have been presented around the world, including at the Museo Nacional Centro de Arte Reina Sofía, Madrid (2014) and the National Gallery of Art, Washington, D.C. (2013). In 2013, he was one of seven new appointees to President Barack Obama’s Committee on the Arts and the Humanities. Other prestigious awards include a 1991 fellowship from the National Endowment for the Arts, a 1997 grant from the MacArthur Foundation and the Wolfgang Hahn Award in 2014. 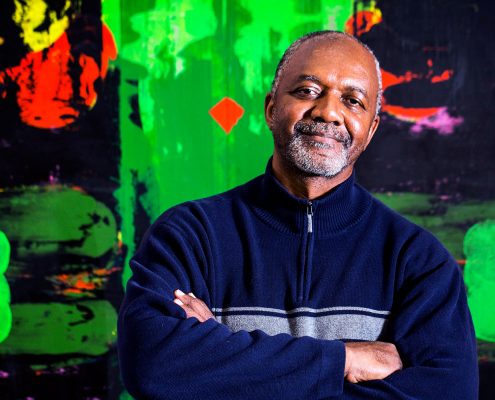 “The Rythm Mastr project has been under development since 1999, first as an installation, then as a conceptual project titled Dailies comprising three cartoon strips: Rhythm Mastr, P-Van-, and On The Stroll. These overlapping comics all take place in ‘Black Metropolis’ – the long dreamed-of capital of the ‘Black World’ – and are written in Black vernacular English. The comics form provides a vehicle for talking about all manner of subjects.”

Kerry James Marshall Is Shifting the Color of Art History

The exhibition is presented by La Biennale de Montréal in partnership with the MMFA as part of the BNLMTL 2016, The Grand Balcony.