From May 1 to October 12, 2014
International Digital Arts Biennal

The Museum will present – as a principal partner – the 2014 International Digital Arts Biennial with the multidisciplinary company Lemieux & Pilon 4D Art. This retrospective exhibition, an immersive installation, will celebrate the thirtieth anniversary of the company founded in Montreal in 1983. With over thirty original productions to its credit already, Lemieux Pilon 4D Art has breathed new life into performance art through a bold combination of theatre, film, dance, poetry, music, visual arts and sound to create original and captivating worlds that have been acclaimed wherever they perform. The company creates hybrid shows fusing reality and virtuality, the performing arts and new media. Their productions, which employ the technology of virtual projections, erase the boundaries between performance, set design, film, video, dance, poetry, visual arts, light, music and sound exploration, thus promoting the integration of these diverse forms of expression. After Robert Lepage in 2012, the Museum aims to extend the contacts it has made with the city’s cultural players, to become a partner rather than a competitor, so as to promote Montreal as a cultural metropolis by working with the principal organizations in this field.

These two artists are leading the charge of multidisciplinary creativity, a trademark of Montreal’s world-renowned theatre scene. Nathalie Bondil Director and Chief Curator, The Montreal Museum of Fine Arts 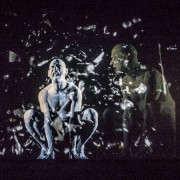 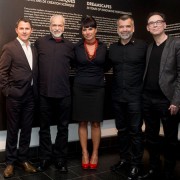 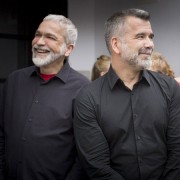 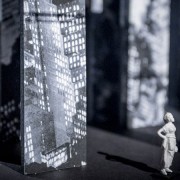 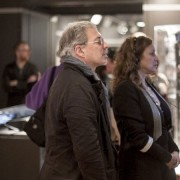 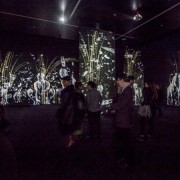 Founded in Montreal in 1983-1984, Lemieux Pilon 4D Art is a multidisciplinary company with more than thirty original productions to its credit. Internationally recognized for their mesmerizing fusion of dance, theatre, music, visual arts and film, Michel Lemieux and Victor Pilon are the dynamic duo who create unique hybrid productions that merge the real and the virtual, the performing arts and multimedia.

Lemieux and Pilon have also collaborated on other types of shows, as well as on exhibitions and special events. Past project partners include the Rio Tinto Planetarium, Cirque du Soleil, the Montreal and Quebec City opera companies, the Montreal International Jazz Festival, Montreal’s 350th anniversary celebrations, Notre-Dame Basilica in Quebec City, the Laval Cosmodome and the Canadian Museum of Immigration at Pier 21 in Halifax. Two of their collaborative works, Delirium and Midnight Sun, made the top-ten list of the city’s most memorable shows of the decade, as selected by the Journal de Montréal, the city’s most popular daily newspaper. Lemieux Pilon 4D Art’s avant-garde productions are lauded throughout Quebec, across Canada and around the world.