Chagall: Colour and Music is the biggest Canadian exhibition ever devoted to Marc Chagall (1887-1985). Featuring 340 works of art and a large selection of documentary works, including films, photographs and musical excerpts, this multidisciplinary exhibition is the first to focus on Chagall’s profound connection to music in his life and work. Through this original approach, the exhibition demonstrates how all of Chagall’s work, from his paintings, works on paper, costumes, sculptures, ceramics, stained glass and tapestries to his creations for the stage and his large-scale decorative and architectural projects, were imbued with musicality. The layout of this major exhibition is both chronological and thematic, covering all the periods of the artist’s long and productive career – his years in Russia, his Parisian period, his exile in New York, his time in Mexico and his life in the South of France.

Many of the galleries feature a musical accompaniment, and the exhibition includes films, slideshows and an incredible projection of the famous ceiling of the Paris Opera, which Chagall completed in 1964. This close-up view allows us to appreciate the splendour of this monumental decor and view details that are normally not visible to the naked eye. The ceiling of the Paris Opera and the murals of the Metropolitan Opera in the Lincoln Center for the Performing Arts in New York (1966) embody the concept of total art that was so important to the artist. 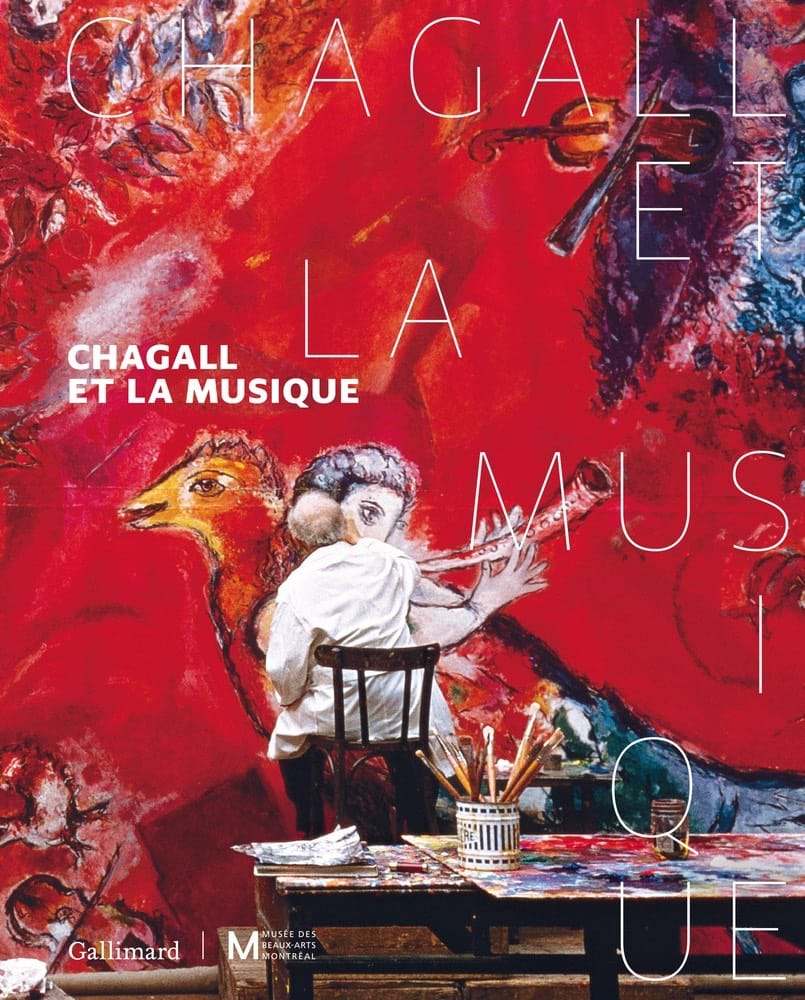 This exhibition was organized by the Montreal Museum of Fine Arts in collaboration with the Los Angeles County Museum of Art and initiated by the Cité de la musique – Philharmonie de Paris, and La Piscine – Musée d’art et d’industrie André Diligent, Roubaix, with the support of the Chagall Estate.

The exhibition was made possible thanks to the generous support of RBC, Presenting Sponsor of CHAGALL: COLOUR AND MUSIC, and Federation CJA, Major Patron in celebration of their hundredth anniversary.

The Museum extends its thanks to the Azrieli Foundation for making it possible to present major works of art in this exhibition.

The exhibition design is made by Anik Shooner, president and architecte, and Claudio Nunez, conceptor, at Menkès Shooner Dagenais LeTourneux Architectes, under the direction of Sandra Gagné, Head of Exhibitions Production at the MMFA.

The Museum wishes to thank Osler, Hoskin & Harcourt and acknowledges the vital contribution of Air Canada, the Volunteer Association of the Montreal Museum of Fine Arts, Tourisme Montréal, the Consulate General of Israel in Montreal, as well as Bell, La Presse and the Montreal Gazette.

The Museum extends its thanks to Quebec’s Ministère de la Culture et des Communications and the Conseil des arts de Montréal for their ongoing support. The exhibition also received the support of the Department of Canadian Heritage through its Canada Travelling Exhibition Indemnification Program. The Museum’s International Exhibition Programme is aided financially by the Exhibition Fund of the Montreal Museum of Fine Arts Foundation and the Paul G. Desmarais Fund.

The Museum would also like to thank the Volunteer Guides for their indispensable contribution, as well as all its members and the many individuals, corporations and foundations – in particular the Fondation de la Chenelière, directed by Michel de la Chenelière, and the Arte Musica Foundation, presided over by Pierre Bourgie – for their generosity.