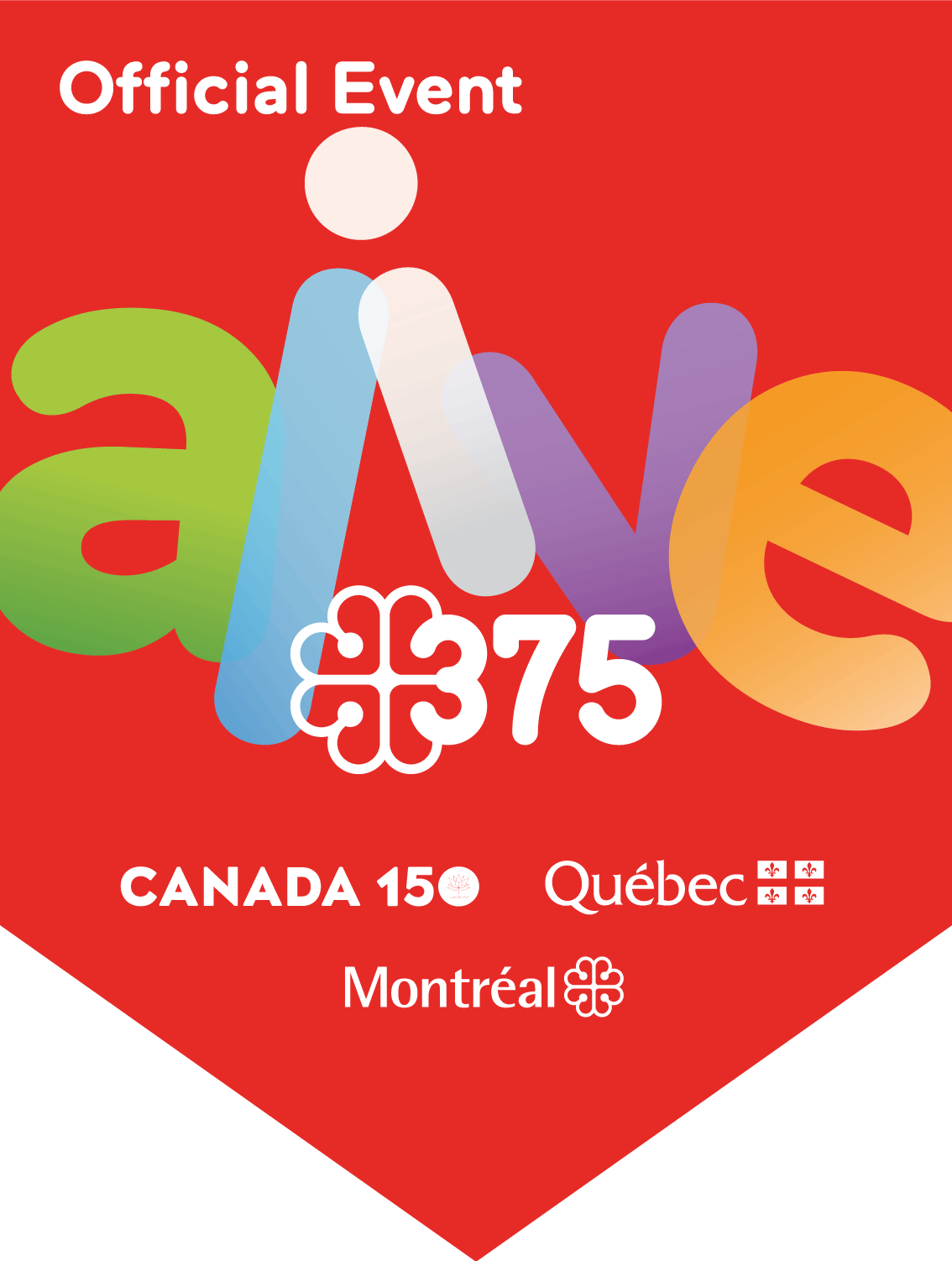 A public art exhibition on Sherbrooke Street
June 5 to October 29, 2017

“This exhibition expresses fundamental values of humanism and peace that are so important to me. Expo 67 contributed to opening Montreal and all of Quebec up to the world, and, fifty years later, people from around the world live here, where they share their culture and their hope for peace.”

Forming part of the official program for Montreal’s 375th Anniversary, La Balade pour la Paix was designed and organized by the Montreal Museum of Fine Arts (MMFA) with the support of McGill University. This public art exhibition of international scope also commemorates two other milestones: the 50th anniversary of Expo 67 and the 150th anniversary of Canadian Confederation. 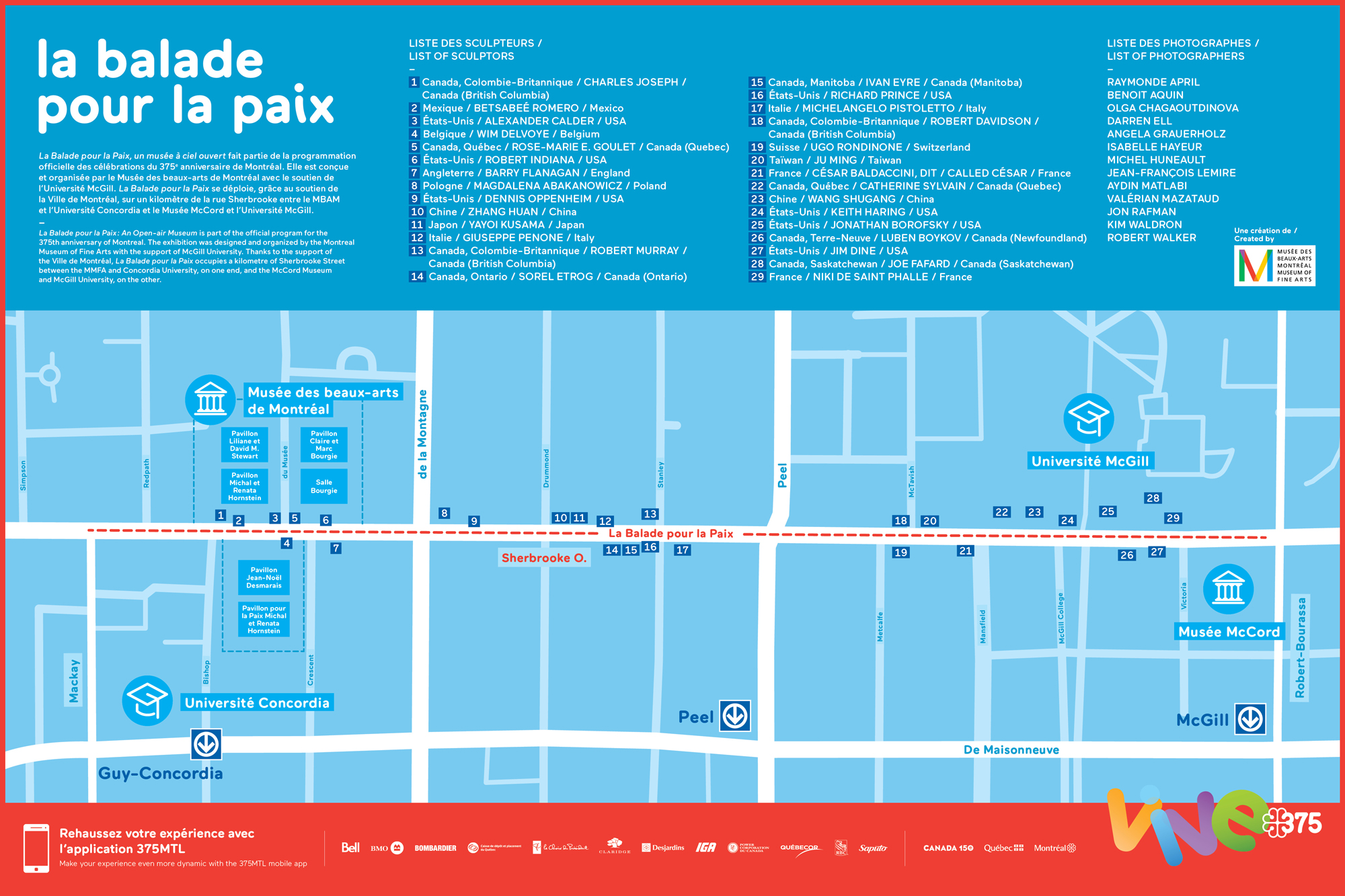 “We build too many walls and not enough bridges”

This belief was expressed by the Enlightenment thinker Isaac Newton. Since “Building Bridges” is the theme of Montreal’s 375th Anniversary celebration, the Montreal Museum of Fine Arts took the initiative to link two of the city’s major institutional and international sectors—Concordia University and the Montreal Museum of Fine Arts at one end with McGill University and the McCord Museum at the other—for the very first time.

A true open-air museum, La Balade pour la Paix extends for over a kilometre along both sides of Sherbrooke Street. Lined with the flags of the world’s nearly 200 countries, the Confederation of Canada’s provinces and territories, and, last but not least, the Ville de Montréal, this festive route is punctuated with Canadian and international artworks. It serves as a reminder that the 1967 Universal and International Exposition—Expo 67—which drew 50 million visitors, was a window on the world and a memorable moment for both Quebec and Canada.

This aesthetically comprehensive and engaging route through the heart of the city is spellbinding. It begins near the new Michal and Renata Hornstein Pavilion for Peace, those Great Montrealers, Holocaust survivors, immigrants who became philanthropists, who made a major donation to the Montreal Museum of Fine Arts: in all, a hundred paintings by Old Masters and other works. Dedicated to international art and education, the Museum’s fifth building is an official Government of Quebec legacy project for Montreal’s 375th anniversary.

The Ville de Montréal’s motto is Concordia salus, which means “salvation through harmony.” Since 1701, when the Peace of Montreal was signed between European colonists and Indigenous peoples—an act of diplomacy unmatched elsewhere on the continent—Montreal has proclaimed itself a site of encounters. A metropolis of culture and knowledge, Montreal is one of North America’s top two cities in terms of student population and number of consulates. Montreal welcomes 76% of Quebec’s immigrants, one of the highest rates of an urban area in Canada. The Council of Europe named Montreal an Intercultural City: this status—unique in North America—is defined in particular by its francophone and anglophone cultures and enriched by its vibrant cultural diversity.

The Montreal Museum of Fine Arts wishes to underscore the contributions of the First Nations and the Inuit on society. We recognize that our institution and exhibitions occupy unceded Mohawk territory, an ancient meeting place for the Indigenous people of this continent.

Some thirty monumental sculptures by contemporary artists from several countries and the five main regions of Canada are on display here. They are on loan through the generosity of private and public collections, artists and galleries. In keeping with the artistic universality of Expo 67, each work in its own way conveys a commitment, thought or humanistic message of peace, over and above its aesthetic properties, intent and choice of materials.

PHOTOGRAPHS OF A CHANGING WORLD

Visitors strolling by the sixty-seven stations along the route will see recent works by thirteen contemporary photographers. These Montrealers of various backgrounds have criss-crossed the planet to capture the state of the world with their cameras. Intimately linking art and life, their documentary and art photographs share a reflection: this urban photo album, based on the values of openness and tolerance, expresses our need to find better ways of living together on the planet we share.

The photographers represented are: Raymonde April, Benoit Aquin, Olga Chagaoutdinova, Darren Ell, Angela Grauerholz, Isabelle Hayeur, Michel Huneault, Jean-François Lemire, Aydin Matlabi, Valérian Mazataud, Jon Rafman, Kim Waldron and Robert Walker. Aydin Matlabi is the author of the series “Heritage” shown here (ill. 7). In 2016, he photographed children with HIV or disabilities, war orphans, child soldiers and children accused of witchcraft in the Bumi orphanage in Lubumbashi, Democratic Republic of Congo. By dressing them in African wax prints, the quality of which reveals the social status of the wearer, the artist gives the children back power over their lives and their future. The photographer received the Healing the Void Award at the Artraker Biennial in Valetta, Malta, in 2017.

A Manifesto for Public Art

“Simplicity is the glory of expression,” Walt Whitman said. The route was designed by Claude Cormier + Associés, an international landscape architecture firm based in Montreal. The urban furniture is by Quebec industrial designer Michel Dallaire.

The organizers wish to thank the project’s many artists, lenders, collaborators and institutional and private partners, as well as the Ville de Montréal and the residents of Sherbrooke Street, who have agreed to accommodate these sculptures, photographs and flags.

The Museum extends its thanks to Quebec’s Ministère de la Culture et des Communications for its essential contribution, and the Conseil des arts de Montréal and the Canada Council for the Arts for their ongoing support.

Presenter of the Museum’s Year of Peace